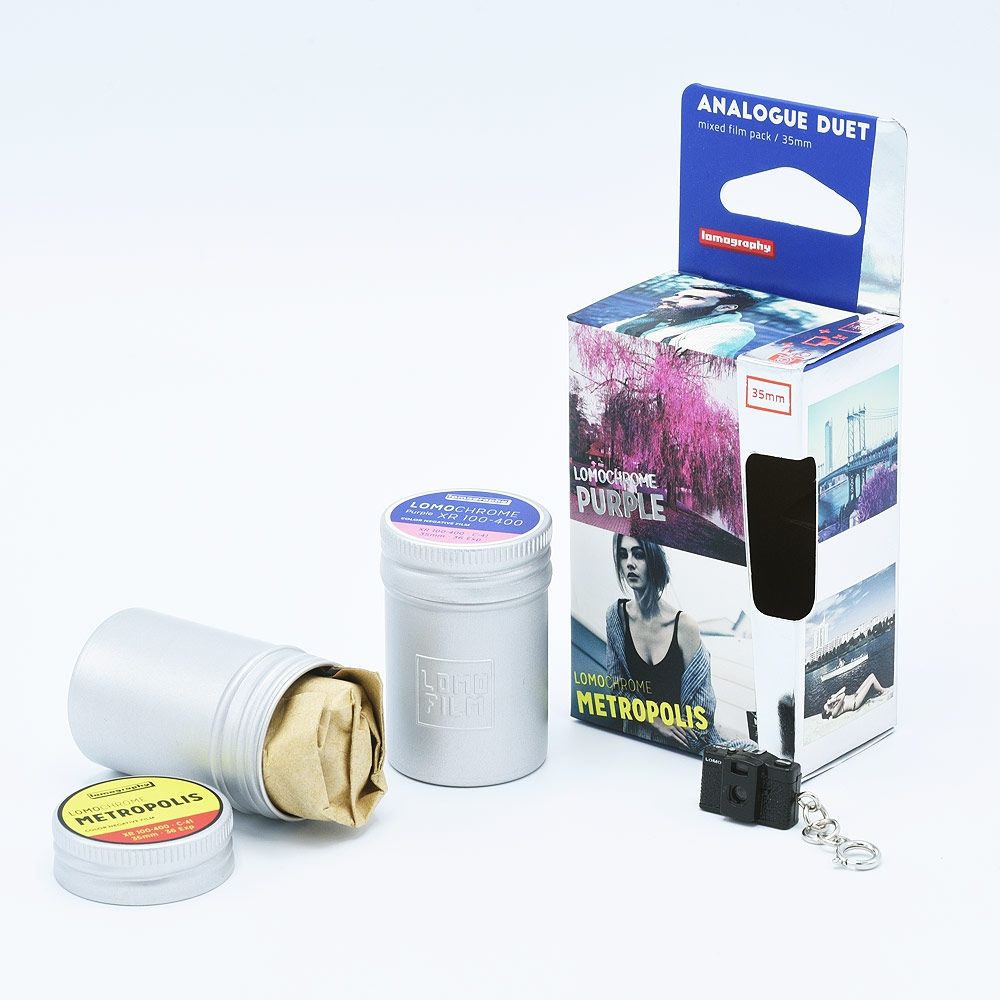 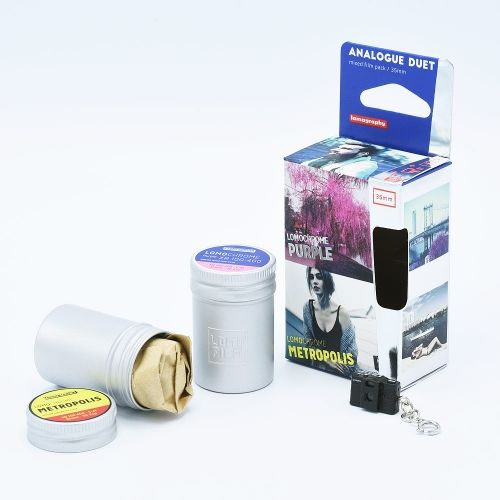 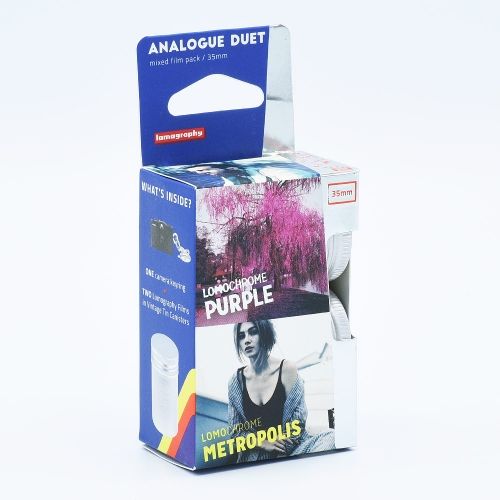 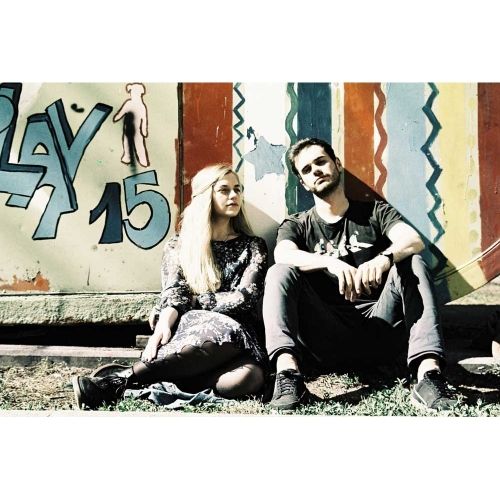 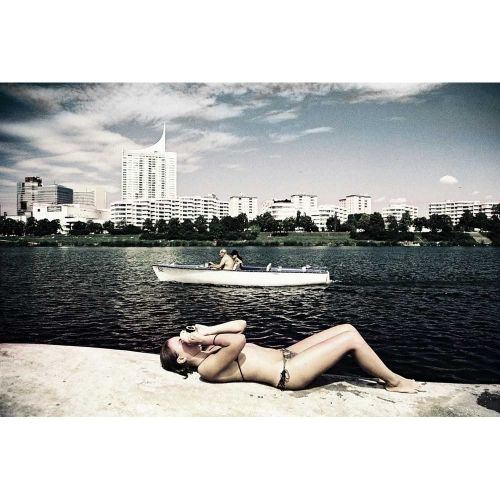 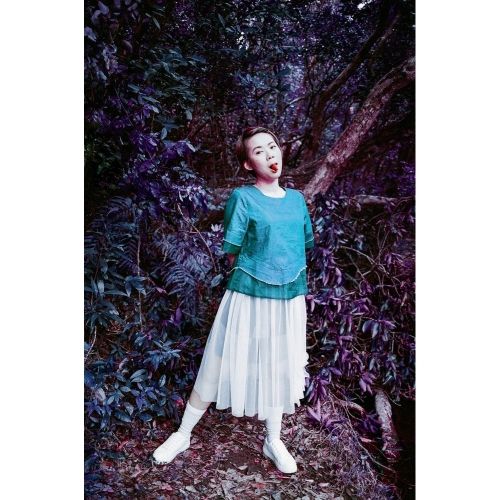 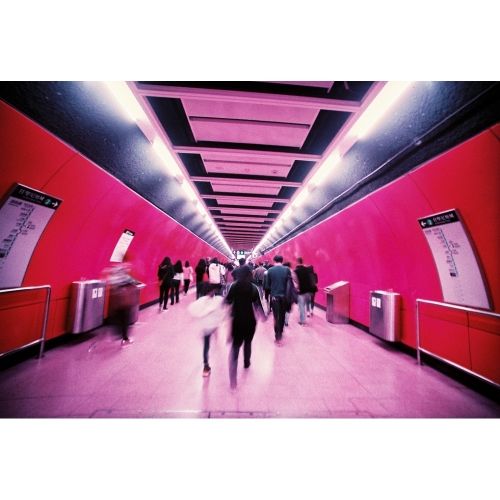 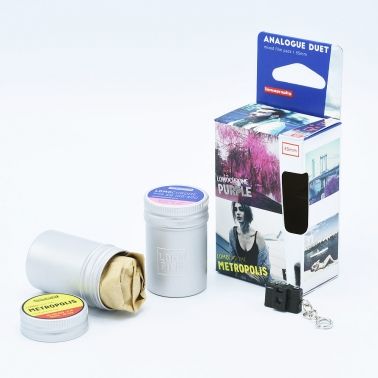 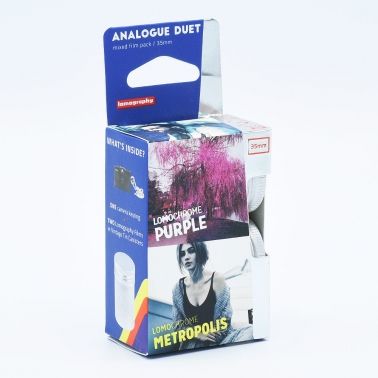 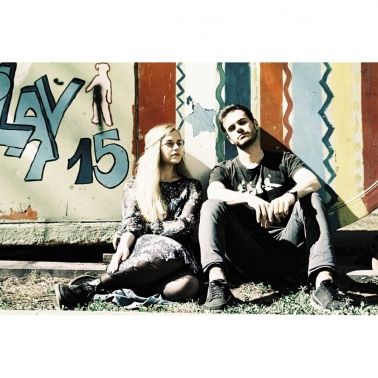 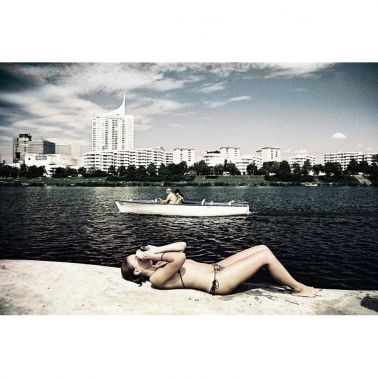 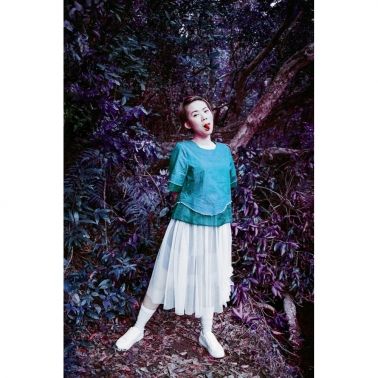 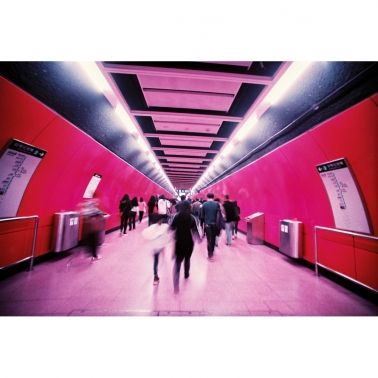 This Lomo Analogue Duet contains the two most popular special effect films from Lomography, the LomoChrome Purple and Metropolis 35mm film. These films come in a special film canister. On top of that you also get a free Lomo keychain!

First New Color Negative Film in Half a Decade

For the first time in 5 years, a new color negative film has seen the light of day – introducing LomoChrome Metropolis – an original color negative film from the Lomography films manufacturer laboratory. The LomoChrome Metropolis is built for exploring the urban jungle in all of its grit and beauty. Search for rays of color in a sea of black skyscrapers, frame your subject as they trudge the streets of ghost towns, and disappear down sparsely lit subway entrances and capture portraits unlike anything else.

Available in 35 mm, 120, 110 and 16 mm formats, LomoChrome Metropolis promises to bring a new perspective to every corner of the analogue world. Take your adventures to greater heights than ever before with a unique extended 100-400 ISO range and fine cinestyle grain structure. Change sensitivity mid role as your walk into the urban abyss below, while remaining compatible with the classic C41 process. LomoChrome Metropolis revels in mischief, confusion, love and conflict. True to its name, LomoChrome Metropolis was built to serve as the foundation for the future of film photography.

Fight back against the flood of fake and posed imagery, staged vacation shots, empty happiness, carefully curated spontaneity, countless selfies and empty images – devoid of meaning, love, and sincerity. Take a deep breath and go back to the basics with film photography. Learn anew the feeling of surprise and uncertainty, build true connections with your subjects and realize the true value of images.

Designed for the universal C-41 process, LomoChrome Metropolis can easily be developed at home or in nearly any photo lab. Regardless of what ISO you choose, the development process remains the same.

The LomoChrome Purple 35mm color film is back and better than ever (emulsion 2019). Carefully crafted by the color contortionist chemical engineers of Lomography, the new 2019 LomoChrome Purple film is currently fermenting in a top secret location, maturing to perfection. A delicate balance of the finest photon reactive silver halide crystals, this new formula is composed of an exquisite fusion of special color compounds that will yield tones that flourish and fade. Use it to craft a heady blend of earthy reds, crisp plums and velvety violet notes. Limited quantities, be quick to grab yours!

Back with a Brand New, Better-Than-Ever Formula

LomoChrome Purple film is back by popular demand! This top secret new formula has increased sensitivity to red hues, improved exposure at the recommended setting of ISO 400, and less grain than its predecessor

Aside from its remarkable color quality, the new LomoChrome Purple delivers vibrant photos with superb sharpness — and now with even finer grain than ever before! This new film also allows you to shoot in any weather condition and achieves breathtaking effects without using any special filters

Control the color changes in your photos by selecting different ISO settings. Green tones will become a shiny purple when you use an ISO 100 setting, but with an ISO 400 setting greens will instead become a darker indigo. Explore unlimited color creativity!

The sensitivity of the film is ISO 400 (27°). Yet its high flexibility in terms of light sensitivity also allows you to set your camera to ISO 200 (24°) and ISO 100 (21°). This gives you more options for experimentation in different lighting conditions. Cartridges are non-DX-coded!

Just like its predecessor, the new LomoChrome Purple film can be developed with the standard C-41 process.

The storage temperature for this film is 20°C. To extend the life of the film, we recommend storing it in the fridge, under 10°C. Don’t expose the film to temperatures above 30°C for long periods. 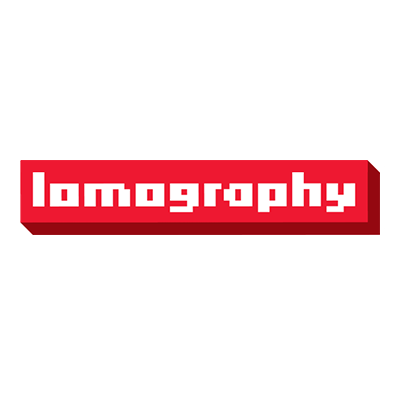