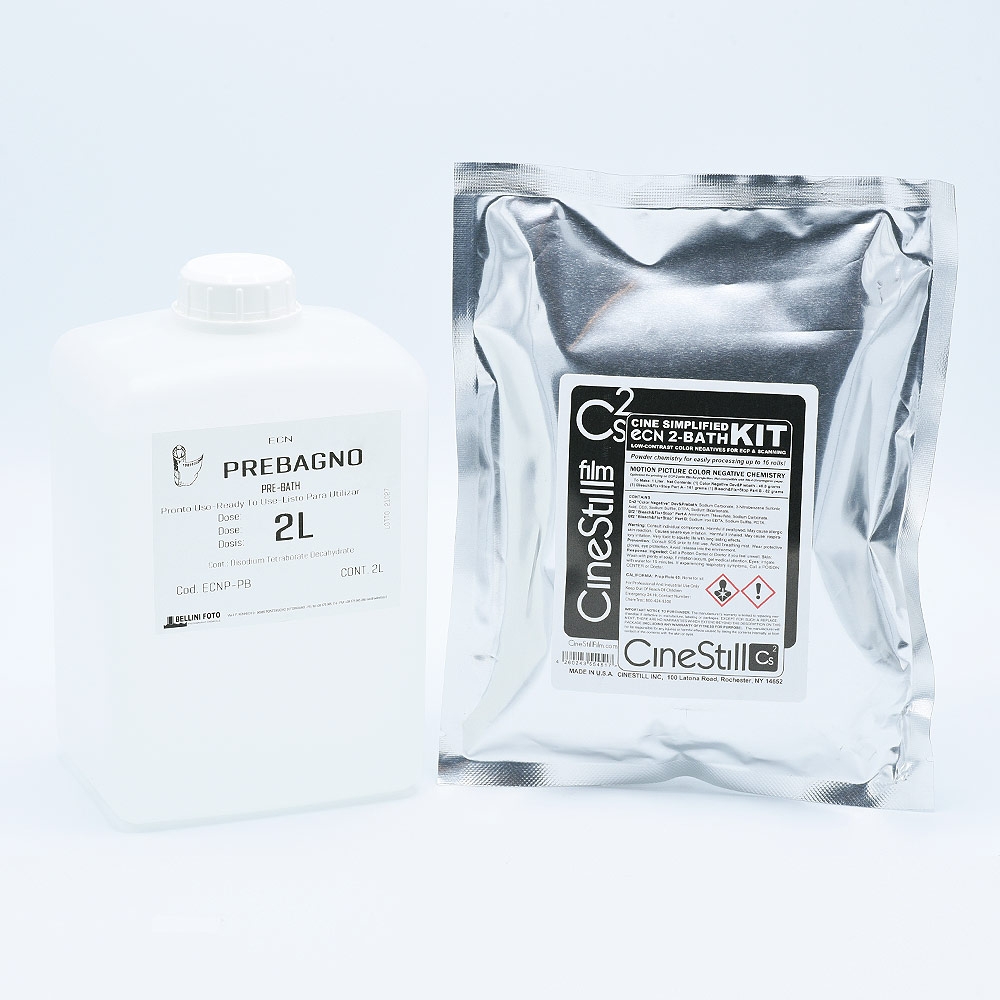 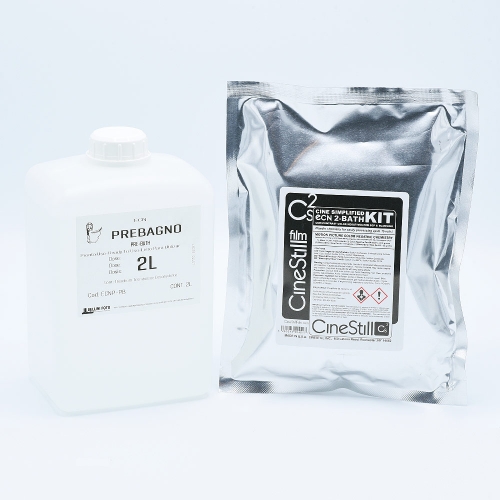 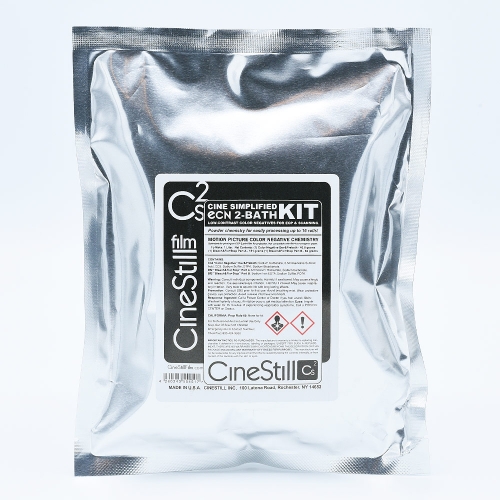 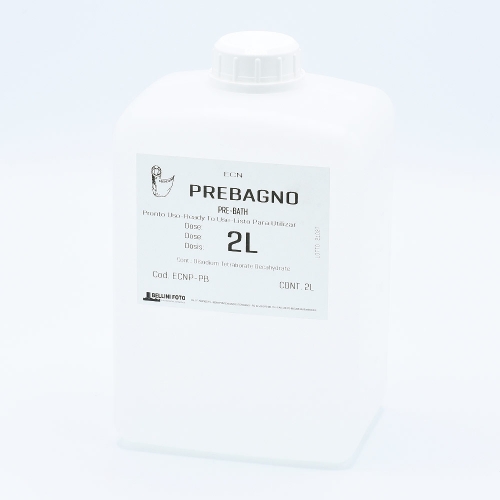 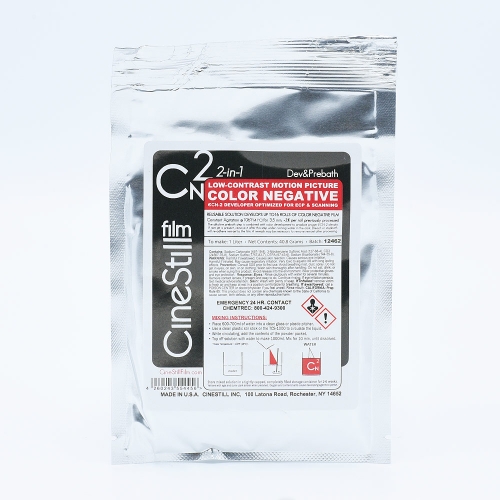 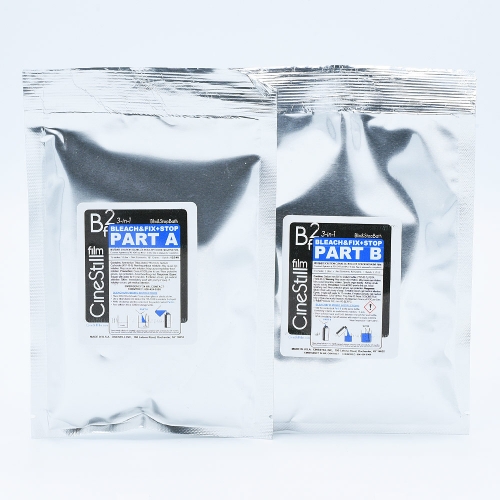 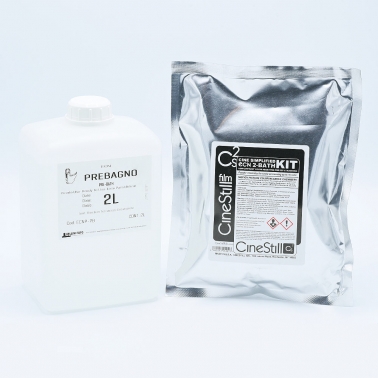 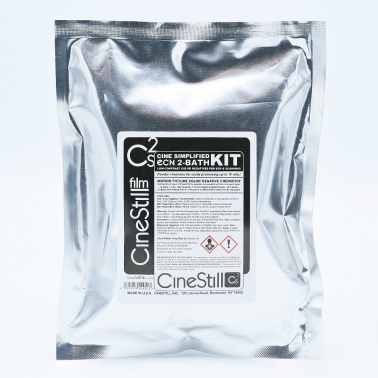 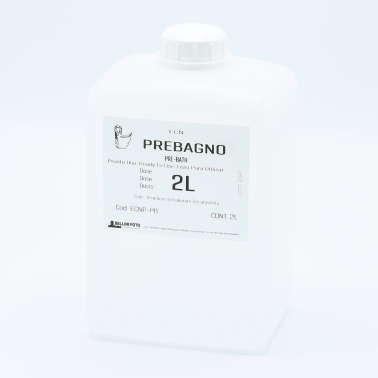 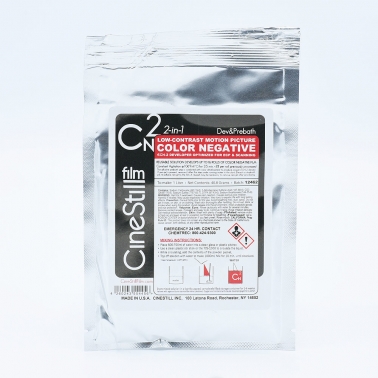 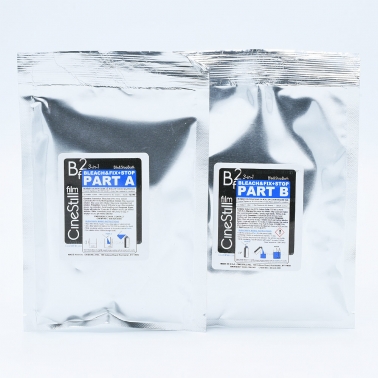 This CineStill & Bellini Cs2 ECN-2 Processing Kit Combo contains everything you need to develop Motion Picture Film like Kodak Vision3 using CineStill's new Cs2 ECN-2 process. The combo includes Bellini's liquid remjet remover to remove the remjet layer from your films to get the most out of your CineStill Cs2 kit. After all, without removing the remjet layer, the Cs2 kit is one-shot when used with real motion picture films that contain a remjet layer (so not the CineStill 50D and 800T films).

Bellini's Remjet Removal Agent is a simple, effective liquid solution for easily removing the remjet (carbon) layer on motion picture films such as Kodak Vision3. It identical to the initial rinse or pre-bath within Kodak's ECN-2 process that is also included in Bellini's ECN-2 home use kits.

To remove the remjet layer from motion picture films, you rinse your film in this bath for about ten seconds at about 27°C. You can do this in a regular film developing tank like Paterson's. While doing so, handle continuous agitation and put the solution back into a storage bottle (the solution is reusable). Do this a three to four times in a row and in the meantime rinse the film with warm water (27 °C to 38 °C). When you pour away the rinse water, you will see that it has turned a black color as the carbon layer is systematically removed from the film. Alternate treatment in the pre-bath and warm water until the rinse water is clear again.

It is unavoidable that residues of remjet remain on the film negative. Therefore you can choose to manually rinse your film again (in complete darkness) after treatment in this pre-bath and remove the residues from your film with your hands. This can also be done after the actual film development that follows (ECN-2 or C-41) but be vigilant that the emulsion side of your film negative does not come into contact with any residues on the other side of the film strip.

The solution should not be diluted and has a shelf life of several months in full bottles. Use fresh concentrate if the working solution starts to show a black color due to contamination with remjet.

Developing CineStill films like 50D and 800T in C-41 color chemistry indeed gives unique results that have that moody cinematic look. However, the full potential of these films can only be achieved when developing the film in proper motion picture chemistry which is the ECN-2 process designed by Kodak. ECN-2 is a complex process that was until a few years ago only accessible for cinematographers. However, some products came on the market that allowed home users to also develop their motion picture films in a simplified version of the ECN-2 proces. The most known product is the liquid ECN-2 Kit from Bellini which can also be found at Retro Camera. CineStill itself now also comes with its own simplified version of the ECN-2 process with the Cs2 Processing Kit which can be seen as the missing puzzle in their attempt to bring motion picture film look to analog still photography.

The CineStill Cs2 2-bath process simplifies the original 10+ step Kodak ECN-2 process, with uncompromised quality and accurate characteristic curves, while making it safe and foolproof for at-home use. Any motion or still photography film can be processed in this simplified 2-bath powder kit, resulting in a low-contrast color negative that is suitable for the motion picture workflow and scanning. It recommended to always overexpose your color film with one stop to get the best results.

The Cn2 Color Negative Developer is combined with a pre-bath accelerant which kicks off development to produce proper ECN-2 density. The bleach and fixer baths are combined with the stop and washing baths in the Bf2 Bleach&Fix+Stop” bath, to reduce risks to health & safety and processing defects caused from hazardous chemical carryover. Bf2 comes in two parts that have to be mixed before use. After a final washing of your film you will have CineStill negatives matching Kodak’s characteristic curves for proper ECN-2 motion picture processing. In contrast to the Cs41 process, the Cs2 process has to be maintained at 40 °C at all time making a temperature control system like the TCS-1000 necessary.

The kit has a capacity of 8 35mm films (36 exposures) or 120 films that don't have a remjet layer! Genuine motion picture film that is for example cut by yourselves from a roll (non-CineStill films) contains a remjet layer that has to be removed before using this kit using the liquid remjet removal solution from Bellini. If the remjet layer is not removed this kit will be one-shot as the remjet layer will contaminate the baths. The Cn2 Color Negative Developer has a shelf life of about two weeks that can be doubled using an anti-oxidizing spray like Tetenal Protectan. The Bf2 bath has a longer shelf life.

Full instructions on how to use this kit can be found here.