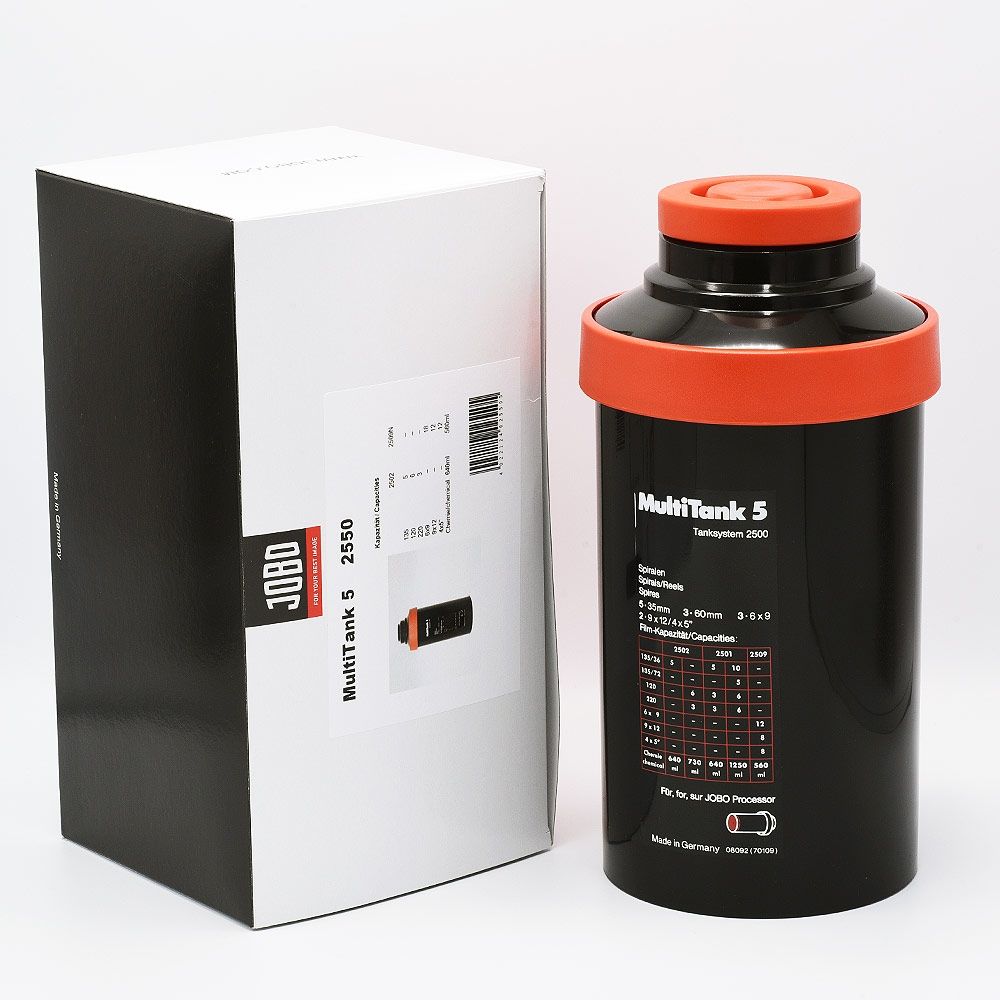 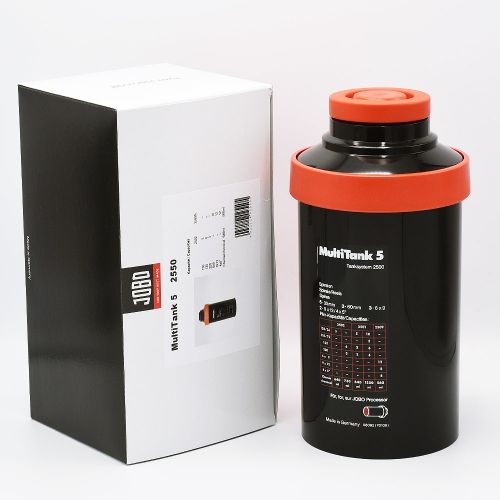 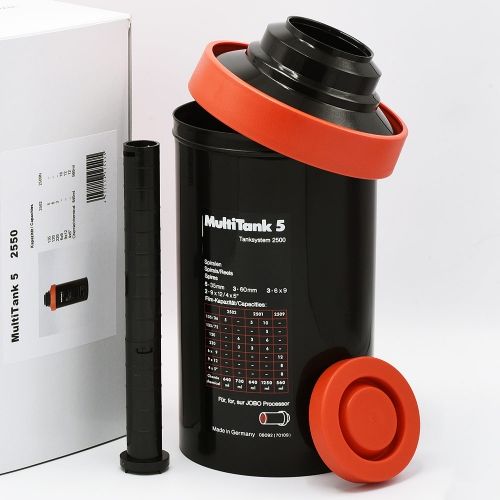 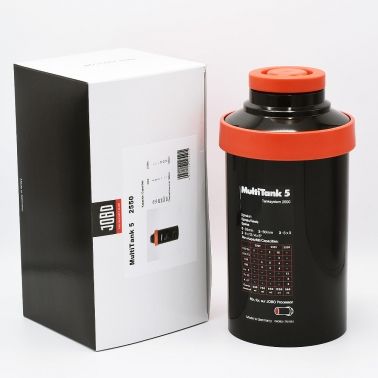 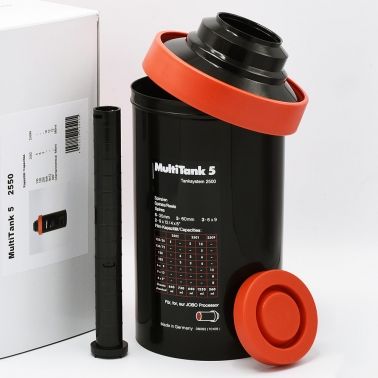 The Jobo film developing tanks from the modular 2500 tank system are made of a high-quality, chemical-resistant plastic and are suitable for the development of 35mm film, roll film and sheet film, depending on the model. The 2500-series developing tanks are aimed at (semi-)professional use and are mainly focused on automated rotation development with a Jobo Film Processor. Nevertheless, the tanks can also be used for manual inversion development. This 2550 developing tank is therefore supplied as standard with the red tank lid.

The Jobo 2550 Multi Tank 5 film developing tank is the largest developing tank of the 2500 series as it is one of the best solutions on the market for developing large batches of 4x5" sheet film. Of course, the tank can also develop 35mm film and 120 roll film.

The Multi Tank 5 developing tank is compatible with two Jobo 2509n reels for sheet film development. The 2509n reel can hold up to 6 sheet films of size 4x5 inch / 6x9cm / 9x12cm. The reel is made of durable materials for long term use. The design of the reel has been further refined over the years to ensure optimal circulation of photochemistry and an even and consistent development of the sheet film. The reel can be loaded easily by hand or with the optional 2508K Jobo Sheet Film Loader for fast and scratch-free loading of the film into the reel. For rotation development with a Jobo Processor, the use of the supplied plastic guides is recommended for the most qualitative development. The 2509n reel is available separately. As the 2550 can hold two 2509n reels, the development capacity is twice as large as the 2520 developing tank. The tank can therefore simultaneously develop 12 sheet films of format 4x5 inch / 9x12cm or 18 sheet films of format 6x9cm.

For rotation development with a compatible Jobo processor, the tank only needs 640ml of photochemistry to develop 35mm film, 120 roll film or sheet film and is one of the most economical solutions to develop film regardless of the format. In this case the tank must be equipped with a cog (#1505) to attach it to the processor lift or a magnetic base (#1504) if the processor is not equipped with a lift. Both accessories are not included and are available separately. 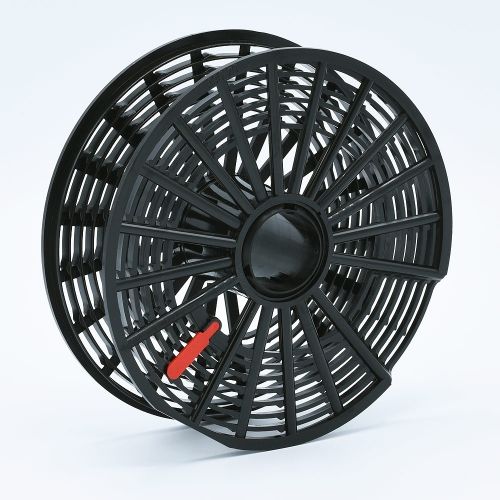 Price € 40.45
The package contains one Jobo 2502 Tank Reel with clip. The adjustable Jobo 2502 tank reel is suitable for the development of one 35mm film or two 120 roll films and is compatible with all Jobo... 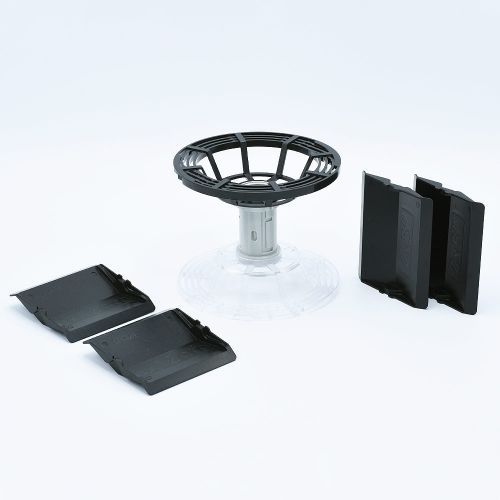 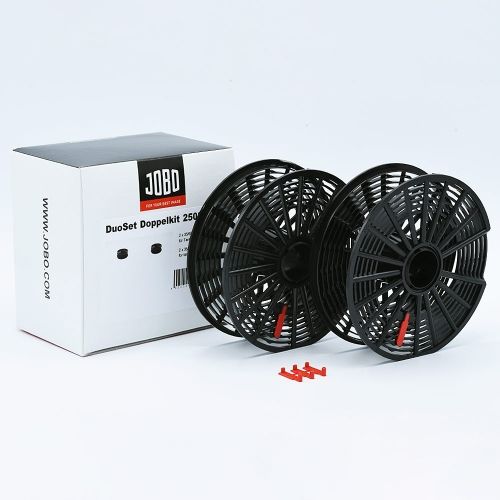 Price € 80.12
The package contains two Jobo 2502 Tank Reels with a set of three clips. The adjustable Jobo 2502 tank reel is suitable for the development of one 35mm film or two 120 roll films and is compatible... 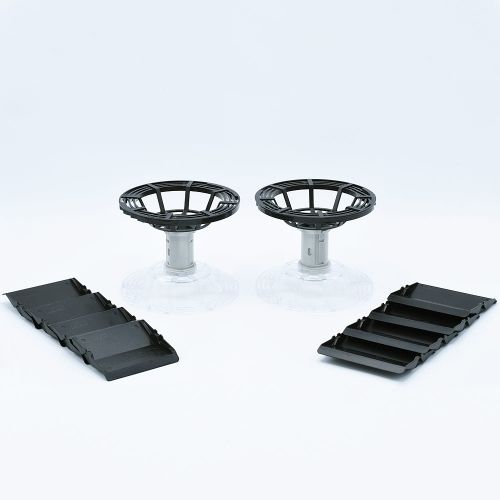